BB Easton is such a fantastic storyteller, and if there’s one thing that I know I can count on, it’s that she will deliver one hell of a story! I definitely recommend checking out Speed, the exciting follow up in her 44 Chapters Series, and don’t forget to enter the GiveAway below!

Because BB Easton had so much fun writing her bestselling, award-winning memoir, 44 CHAPTERS ABOUT 4 MEN, she decided to give each of her four men his own steamy standalone! SPEED is the second book in the 44 Chapters spin-off series—a gritty, taboo love triangle overflowing with dark humor and tangible teen angst. It is based on a true story.

After her possessive, psychopathic, rage-fueled ex, Knight, joins the Marines, sixteen-year-old BB is left trying, and failing, to pick up the pieces of her shattered heart. It isn’t until she meets Harley James—an easy-going, tattooed mechanic with a face as angelic as his habits are sinful—that she learns how to live again. How to laugh again. But will she learn to love again?

Speed is the follow up to Skin (A 44 Chapters Novel, #1) and full of fast cars in the fast lane as young BB tries to move on from heartbreak. With BB Easton’s perfect touch of 90’s era humor and wit, this is yet another sexy, dark, edgy, and totally gripping story!

BB, Harley, and Knight were all so intriguing with their complex and conflicted characters. Each of them had such a balance of good and bad, and it was hard not to feel for them. I was both rooting for them and wanting to smack them, and just when I thought I had altogether had enough, I was tearing up at their gentle words and moments!

BB made a ton of bad decisions, but she had a conscience and really knew better. She fought to find her way and get on the right path. I wasn’t as drawn to Harley. He said all of the right things, and he did all of the right things that BB needed to move on from her loss of Knight. He lifted her spirits and made her smile and feel loved again. I just sat very torn in my feelings for Harley for so much of the story, because I felt like I should have liked him more but really didn’t like who she became while she was with him. Then of course, Knight came back into the picture (hell yes!), and a whole other element of crazy ensued in BB’s journey. I guess I will just always have a major soft spot for that sweet, awful, misguided, and broken skin head. Like with BB, he won my heart as well, and it’s just so hard to let him go. #TeamKnightForever

The overall tone of Speed was a bit different to me than the one from Skin. Perhaps I focused too much on BB spiraling in another wrong direction and lost a little of the romance element in the story. The beginning started off a little slow, but it was realistic in that BB was trying to pull out of a broken heart and depression. Once the story got moving though, I was totally on the edge of my seat wondering what type of trouble she would fall into next!

I just think that BB Easton is such a fantastic storyteller and can certainly weave a tale! I love how she makes me feel like I am right along with young BB on her crazy ride of life. Yes, I am the one actually buckling my seatbelt in the backseat of the car and trying to hold her back from making her impulsive and bad decisions! I get it though, and I like that Easton doesn’t try to cover her stories up in rainbows and roses. Her writing is really witty, gripping, edgy, and raw. She just lays it all out there with her honest words and feelings, and I appreciate that in her writing. I also know that BB Easton’s stories and characters are loosely based on her past experiences, and boy, would I like to know what is real and what is altered!

If you are sensitive to certain issues in your reading, definitely check out her disclaimer at the beginning, because when she says, ‘it is not intended for – and should probably be hidden from – anyone under the age of eighteen,’… she means it! It is quite graphic and there is a lot of profanity, violence, sexual content, and drug use during BB’s youth. However, this is an action-packed ride of growing up, falling in love, learning from mistakes, and trying to find the right path in life. I simply cannot wait for Star (BB’s story with Hans) releasing mid-year 2018, and Suit (BB’s story with Ken) coming in 2019!

I needed something to do. I was going out of my mind checking my phone every five seconds waiting for Harley to call. I’d bitten off all my fingernails, applied and reapplied my makeup, worn a path into the carpet next to my bed from pacing, and smoked at least a pack of cigarettes—and I’d only been awake for an hour.

I even called in to work to see if I could pick up some extra shifts. I knew they’d say no, but it was worth a shot. I was so restless. I went from going to school full-time, working part-time, and spending every other minute with Knight to working twenty hours per week and spending the other hundred and forty-eight staring at a TV screen and wondering if I’d ever be able to feel again.

Well, I was feeling again. Feeling like I wanted to jump out of my fucking skin.

The night before had been more fun than I’d ever had. Don’t get me wrong, I’d had plenty of fun in my sixteen years, but it was always the bad kind of fun. The kind of fun that ended with somebody getting hurt. Or getting into a fight. Or brandishing a weapon. Or getting pregnant. Or vandalizing a drug dealer’s car. Or dying. Or getting arrested. Or going to the hospital. Or having a bad trip. Or puking up malt liquor all night. Or running from Latin gangsters. Or having to walk three miles to Juliet’s house at two a.m. with no jacket. That’s how my nights of “fun” usually ended. And I guess my night with Harley could have ended the same way if I’d gotten busted going twenty miles over the speed limit with beer on my breath. But I hadn’t.

Because Harley was an angel.

That was the only explanation. Harley was a golden-haired angel delivered to me from the universe to apologize for the utter shit show my life had become after Knight kicked his way into it. The gods must have been like, “Damn, that really went sideways fast. Our bad. Here’s a tattooed, muscle-bound, baby-faced sex machine to make up for it. Oh, and we’ll even gift wrap him in a vintage Mustang. Our treat.”

But if he really was a gift from the cosmos, then why hadn’t he fucking call—

“Hello?” I almost dropped the glittery Nokia that hadn’t left my hand all morning as I scrambled to answer it. “Hello?!”

“Hey, Lady.” The gravely sound of Harley’s voice and the lazy smile I could almost see on his face had me squeezing my eyes shut and pressing my lips together in an attempt to suppress the girlie squeal that was about to burst out of me.

“You called,” I squeaked in disbelief.

Harley chuckled. “Of course I fucking called. I can’t stop thinking about you.”

“Huh?” I cleared my throat. “I’m sorry, you’ll have to leave a message. BB is dead right now.”

Harley’s laugh danced through my head and into my heart and tickled my fucking soul. “Is she alive yet?” he asked.

“Let me check…nope. You killed her pretty good.”

“I was really hoping she’d come see me at work today.”

“What time?” I blurted out.

“Around four? I get off at five, and this afternoon is looking pretty slow.”

“Okay,” I said. “I mean, I’ll see if I can reanimate BB by then. She might want to eat your brains, though, so just be prepared.”

Oh, good save, I thought, rolling my eyes at myself.

Harley chuckled and said, “Tell BB she can eat any part of my body she wants.”

I blushed crimson at the innuendo in his voice.

“See you at four, little zombie,” he said before hanging up.

Have you read 44 Chapters About 4 Men and Skin yet? 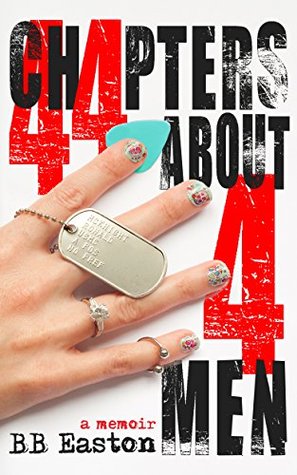 If you are looking to change up the pace of your reading this is definitely one for you! It is written as memoir, takes you on quite the ride, totally unique and off the wall, lighthearted, completely entertaining, and just plain funny! Read my full review

This 2017 Top Read for me is edgy, gritty, angry, raw, and kinky as hell. At the same time, it is sweet, romantic, and beautiful! Read my full review

BB Easton lives in the suburbs of Atlanta, Georgia with her long-suffering husband, Ken, and two adorable children. She recently quit her job as a school psychologist to write stories about her punk rock past and deviant sexual history full-time. Ken is suuuper excited about it.

Have you read any books by BB Easton? What do you think about her writing style?  Let me know in the comments!