The Thing About Love by Kim Karr is NOW LIVE and only 99c for a limited time!

This was super sweet, and although this was a fun read, it was also an incredibly touching story. I definitely recommend picking up this charming and tender romance! 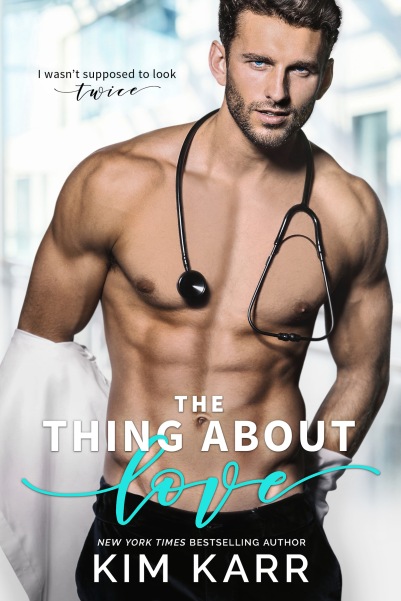 The whole stethoscope-and-white coat thing isn’t my cup of tea.

I prefer a man with an artistic vein in his body. 9 – 5 hours. And I can definitely do without the half-lidded, sleepy bedroom eyes. (Okay, so those are kind of sexy.)

Not that I care, but he’s made it clear he wants nothing to do with a quirky girl like me, which is why he said no.

Turns out no isn’t an option.

I have a quickie wedding to plan, and Dr. Jake Kissinger doesn’t have a choice. He looks at our situation like he’s stuck with me, but in reality I’m stuck with him. Stuck with his pouty mouth. His long, lean body. And stuck with those loose, low riding scrub pants. (Okay, so the doctor thing is growing on me.)

When spending time together turns into more than it should, I know I’m in trouble.

He isn’t supposed to make my heart pound.

I’m not supposed to make him look twice.

And we aren’t supposed to spend the night together. (Okay, so he has more than one artistic vein in his body, and other places.)

Falling for him is definitely a mistake.

Jake is unavailable, and I know it.
Just not in the way you might think.

I guess you can’t have your cake and eat it too.

The Thing About Love by Kim Karr was such a tender and charming romance!

Jules Easton was on her last leg as the wedding planner for Easton Design and Weddings, and she desperately needed the wedding for the governor’s son. Her family business was in a downward spiral, and both the cash flow and credibility of this wedding would help show its success. Jules also needed to prove to herself, and her uncle, that she was actually capable of taking over his business so that he could retire. Her meeting with the bride-to-be, Rory Kissinger, is meant to wow and seal the deal, but the unexpected happens when she shares a hot and flirty moment with the delivery guy before the appointment. When Rory arrives, Jules begins to think that the delivery guy might actually be the groom and lands him with a cupcake to the face. However, when the case of mistaken identity soon reveals that he is not only Rory’s devastatingly handsome brother Jake, but also the ‘checkbook’ for the wedding, Jules soon finds that her rash decision could jeopardize everything that she has worked so hard for.

Jules and Jake’s characters couldn’t have been more different. I really adored Jules, and although I wasn’t sure about Jake at first, I grew to love him as well. Jules was warm and caring, sassy and impulsive to a fault, and knowing she was a bit of a mess worked whole heartedly in everything that she did. Jake, also referred to as ‘Dr. Kiss’ by the women who fawned over his sexiness, was an impatient and arrogant ass, who was also extremely intimidating with his need for control in his life. He only allowed his sister, Rory, and his grandmother to see the sweet man hiding behind his gruff exterior. However, forced to work together to plan Rory’s wedding, Jules came to see a softer and sweeter side to Jake, and in turn, he saw that there was a lot more to the incapable wedding planner. Love, however, was definitely the one thing that neither saw coming at all.

‘I want the best for him. I want him to feel what I feel. To feel more alive than ever. That’s the thing about love, wasn’t it – you don’t get to pick it, it just happens.’

Jake and Jules truly complemented each other in so many ways. She was soft and light-hearted where he was hardened, and he was a strength where she had doubt. Many of their issues also stemmed from the same tragedy from their past, which only reinforced their understanding of each other. Their relationship helped them heal, and their belief in each other built such a strong foundation that neither Jake nor Jules realized. It was incredibly sweet how they naturally and almost unknowingly fell into love. As their passion blossomed and became more intense, I had such a knot in my stomach hoping they would find their way to be together!

Kim Karr always excels in her writing with her fresh and unique storylines that give me all the feels and emotions. I have also not read many books dealing with the tragedy of 9/11, and specifically focusing on the many children that survived the loss of their parents in the Twin Towers. To think these children would have neither parent to fall back on was truly heartbreaking, and I feel that Karr did a fantastic job of conveying their feelings of fear and loss at such a young age so well in this story.

I always enjoy the secondary characters and family feel that Karr creates in her stories, and I loved the dynamics of Jake’s close relationship with his sister and grandmother. They were so relatable and showed so much of the true strength in family. I did struggle a bit with having so much detail about some of the other secondary characters and how well they fit into this particular story. The Thing About Love is the first in a new series of standalones, and although this was an introduction for these characters, it slowed the initial pace and flow of the story and challenged my interest early on. About halfway through, the pace finally picked up and got rolling, and I really couldn’t put the book down.

This was a super sweet romance, and although this was a fun read, it was also an incredibly touching story. I definitely recommend it and am excited to hear Jaxson and Finn’s stories in Come a Little Closer and Something Just Like This, which are coming soon!

Purchase The The Thing About Love on Amazon – FREE with #KindleUnlimited!

She grew up in Rochester, NY and now lives in Florida with her husband and four kids. She’s always had a love for reading books and writing. Being an English major in college, she wanted to teach at the college level but that was not to be. She went on to receive an MBA and became a project manager until quitting to raise her family. Kim currently works part-time with her husband and recently decided to embrace one of her biggest passions–writing.

Kim wears a lot of hats! Writer, book-lover, wife, soccer-mom, taxi driver, and the all around go-to person of her family. However, she always finds time to read. One of her favorite family outings was taking her kids when they were little to the bookstore or the library. Today, Kim’s oldest child is seventeen and no longer goes with her on these, now rare and infrequent, outings. She finds that she doesn’t need to go on them anymore because she has the greatest device ever invented–a Kindle.

Kim likes to believe in soul mates, kindred spirits, true friends, and Happily-Ever-Afters. She loves to drink champagne, listen to music, and hopes to always stay young at heart.