Even Money was intriguing, a bit crazy, and a really exciting read, with a jaw-dropping ending that left me craving more!

Book one of the all new, suspenseful, and seductive All In Duet from award-winning New York Times bestselling author, Alessandra Torre is NOW AVAILABLE!

Even Money by Alessandra Torre

Sometimes it only takes a minute. A connection of eyes across a room, a quickened heartbeat, and everything changes.

I was a cocktail waitress with a fondness for partying and meaningless sex.
He owned half of Vegas and had the reputation to match.

I should have turned away. Instead, I stepped closer.

Then, the lies started.
Rumors spread.
Stalking commenced.
And someone died.

None of it stopped me from falling in love.

This is book 1 in a duet. The second book, Double Down, will release on June 18th or 25th.

odds offering an equal chance of

winning or losing, with the amount

won being the same as the stake.’

Well, leave it to Alessandra Torre to leave me rendered stunned and speechless! With its jaw-dropping ending, Even Money left me on the edge of my seat and craving more of this All In Duet!

I love feisty heroines, and Bell totally fit the bill. A tragedy in her past once left her helpless, and she was determined to never let anyone get close enough to hurt her ever again. I really felt for Bell’s character and admired her bravado to move forward and not let anything get in the path of what she wanted in her life.

Dario’s character actually surprised me. As a powerful and wealthy man ruling over his Las Vegas casino empire, he seemed arrogant and overbearing, and I didn’t feel that I was going to like him. However, as his complex character and past were revealed, my thoughts changed. I understood and sympathized with his conflicted feelings and saw that underneath his intimidating façade was actually a protective, sweet, and caring man.

Initially, I didn’t really see Dario as a good hero for Bell and felt their being together was too controversial, but as their relationship evolved, it was hard not to see how well they fit together. There was definitely an instant draw and spark between them, which followed with some sizzling chemistry and passion, but there was more depth that Dario and Bell shared with their backgrounds and where they had come from. I really felt that they established a solid understanding and respect for each other, and I loved how Bell gave Dario a run for his money when it came to his controlling nature!

This really is one of those stories where I don’t want to give too much away. I actually started this last year when Torre released some of it (or maybe all?) on the Radish App, but I didn’t get too far into it due to my ‘squirrel’ syndrome and unlocking the weekly increments. But as always, I know that I can count on Alessandra Torre to deliver a unique story, and she certainly did here! Although it was a bit slow at the start, I ended up loving the way she revealed the storyline, and once it got going, it was very suspenseful and kept me on my toes.

I loved the descriptive setting in the Las Vegas casinos, and Torre did a fantastic job submerging me into the casino lifestyle. I also really enjoyed the multiple perspectives from Bell, as a struggling waitress and student, Dario, as a wealthy casino tycoon, and the secondary characters in the story as well.

Even Money was very intriguing, a bit crazy, and an exciting read, and the ‘kapow‘ in the end totally caught me off guard! Now I am anxiously on the wait for the conclusion to this All In Duet in Double Down, coming June 18th! 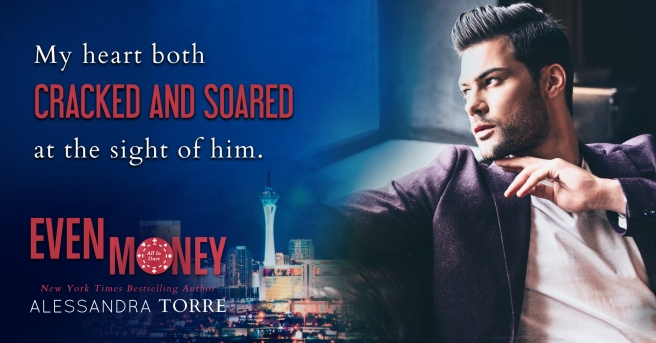 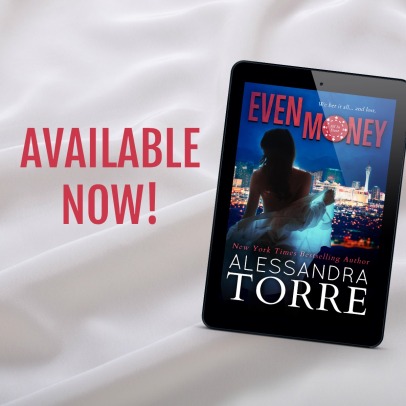 Alessandra Torre is an award-winning New York Times bestselling author of fourteen novels. Her books focus on romance and suspense. Torre has been featured in such publications as Elle and Elle UK, as well as guest blogged for the Huffington Post and RT Book Reviews. She is also the Bedroom Blogger for Cosmopolitan.com.

11 thoughts on “New Release Review ~ Even Money (All In Duet #1) by Alessandra Torre!”