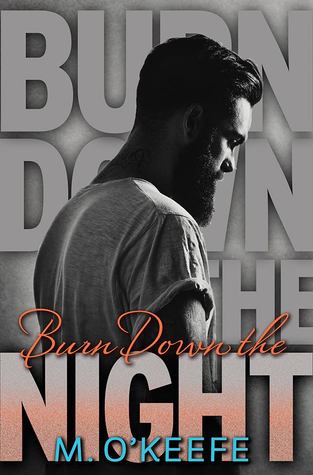 ‘Burn Down the Night’ is the third book in Molly O’Keefe’s Everything I Left Unsaid Series. The books are dark romance with very intriguing stories with lots of mystery, suspense, and steamy romance. O’Keefe can write one heck of a uniquely twisted story, and she is very talented in taking very unlikable characters and opening up your heart to them.

In the first two books of the series, ‘Everything I Left Unsaid’ and ‘The Truth About Him’, we are introduced to Dylan and Annie’s story. While they definitely have their issues, they were both very redeemable characters and their story was very intriguing and suspenseful. ‘Burn Down the Night’ is Max (Dylan’s brother) and Joan’s story where they are brought together to try and save Joan’s sister. They are two people who are completely broken and consumed with guilt with chains from their pasts and mistakes. Knowing they are undeserving and forced to rely on each other, they fight the undeniable heat between them and to admit their need and attraction to for each other.

Surprisingly, I really had a hard time getting into this book, and I felt such a detachment from the characters throughout most of the story.  It seemed very drawn out and I found it difficult to stay engaged in their constant battle against their attraction to each other.  The brief glimpses at possible happiness just weren’t enough to pull me into the story more. I did like the storyline, but the characters just didn’t seem very believable to me.  Towards the end of the story, I did finally begin to have some feeling towards Max and Joan, but it concluded so quickly and overall just didn’t flow well for me.

I really enjoy both O’Keefe’s writing and this series, but this is definitely my least favorite of them.  I am curious to know if there will be another book in this series, and if so I will still look forward to see what O’Keefe has next in store!

***ARC provided by NetGalley in exchange for an honest review ***