‘Sweetest Taboo’ is the conclusion of Dallas and Jane’s sweet and sexy romance in J. Kenner’s S.I.N. Series, and it was certainly steamy, passionate, and suspenseful!

I really enjoyed Dallas in this series. He truly wanted to be a good guy, and his loyalty to Jane showed through and through. I was so surprised that he stood up to his father and how willing he was to sacrifice everything he had at any cost. I admired how Dallas didn’t back down to any of the obstacles that were thrown in their way throughout the series and was so strong and determined to protect Jane and resolve their past. Although I adored Dallas, I have to admit that I did not care for Jane’s character as much.  It bothered me that she just seemed to become so weak and insecure, and although she did have her small moments of courage just didn’t seem to have much of a backbone throughout the series. I really tried to like her and feel that she was a good compliment to Dallas’s strength, but something was missing there for me and unfortunately she just didn’t win me over.

I really enjoy Kenner’s writing and style which really pulls me in, and the storyline was really good and had a lot of depth. The pace picked up quite a bit in this book, and I definitely feel it redeemed itself from the monotony of ‘Hottest Mess’. I was also glad to get more back to more to the mystery side of the spectrum as well, but I did feel that the sexy scenes were still a little redundant. The conclusion wrapped up pretty quickly, but the suspense was certainly there and the ending was sweet. Overall, I really enjoyed this story and thought it was a good series!

I feel there might possibly be some follow up books in this series with possibly Liam or some of the other members of the Deliverance team. I would recommend this series to those that are looking for a VERY steamy read with suspense and mystery to boot!

*** ARC provided by NetGalley in exchange for an honest review *** 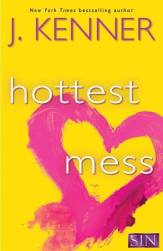