The Risk is now available!

Elle Kennedy did a fantastic job with this standalone sports romance, and The Risk was fun, sexy, sweet, and left me with a big smile on my face! 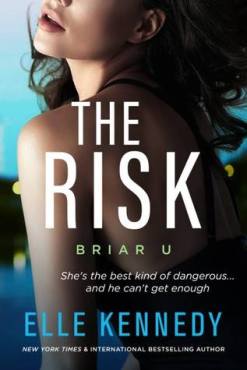 A sexy standalone novel from New York Times and international bestselling author Elle Kennedy. THE RISK takes you back to the world of hot hockey players, feisty heroines, bro banter, and steamy scenes…

Everyone says I’m a bad girl. They’re only partly right—I don’t let fear rule me, and I certainly don’t care what people think. But I draw the line at sleeping with the enemy. As the daughter of Briar’s head hockey coach, I’d be vilified if I hooked up with a player from a rival team.

And that’s who Jake Connelly is. Harvard’s star forward is arrogant, annoying, and too attractive for his own good. But fate is cruel—I require his help to secure a much-coveted internship, and the sexy jerk isn’t making it easy for me.

I need Connelly to be my fake boyfriend.

For every fake date…he wants a real one.

Which means this bad girl is in big trouble. Nothing good can come from sneaking around with Jake Connelly. My father would kill me, my friends will revolt, and my post-college career is on the line. But while it’s getting harder and harder to resist Jake’s oozing sex appeal and cocky grin, I refuse to fall for him.

That’s the one risk I’m not willing to take.

I’ve really been looking forward to reading this Briar U Series and have a few things to note. I always love me a good sports romance, but believe it or not, this sports nut doesn’t follow or really know much about hockey. I also haven’t read book one of the series, The Chase, but I’ve heard so many wonderful things about it. This is also my first read solely written by Elle Kennedy but have enjoyed her collaborations with Sarina Bowen so much that I snagged it up anyway. My risk paid off! Elle Kennedy did a fantastic job with this standalone sports romance, and The Risk was fun, sexy, sweet, and left me with a big smile on my face!

I couldn’t help but adore Brenna and Jake’s down to earth and relatable characters!

I loved Brenna’s sassy style with her tough as nails exterior and trademark armor of red lipstick. Determined to prove that she had changed her life for the better, Brenna was driven to say the least. There wasn’t really one thing that was easy for her, and I really felt for her challenges with her father and the hard path that she faced in her career and dealing with the discrimination of women’s abilities in sports journalism.

‘The guy is gorgeous, and he’s a phenomenal hockey player, but he’s also a notorious player off the ice.’

Jake held such confidence as captain of his hockey team, as well as dedication to his sport. He was very genuine and like Brenna, very focused and determined. I definitely admired the overtime that Jake put in to reach his goals as well as the care he showed for his teammates.

‘Oh no. I’m in trouble. Badass Brenna Jensen isn’t allowed to fall this hard for a guy.’

The love of both Brenna and Jake’s lives was hockey so the timing for either to be in a relationship couldn’t be worse. Not only with them being on rivalry hockey teams but with Jake leaving after graduation to start his professional career in Edmonton. Jake and Brenna’s enemies-to-lovers romance was like a game of cat and mouse and the banter was so much fun to follow. They shared such a spark and tangible chemistry between them, and I loved their happily ever after!

Elle Kennedy did a great job writing this, and I had a really hard time putting it down! The story was so much fun, but it also had some very heartfelt and touching moments as well. I really enjoyed that overall it felt more light-hearted and not angsty or over the top. She also did a great job of pulling me into the world of hockey and balancing it with a super sweet romance. I absolutely enjoyed the secondary characters as well and am craving to know more about this tight group of teammates and friends! 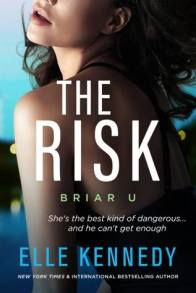 Purchase The Risk on Amazon today!

A New York Times, USA Today and Wall Street Journal bestselling author, Elle Kennedy grew up in the suburbs of Toronto, Ontario, and holds a B.A. in English from York University. From an early age, she knew she wanted to be a writer, and actively began pursuing that dream when she was a teenager.

February’s theme for my Ultimate Reading Challenge was a ‘sports romance’, so this definitely fits the bill! Up next for March is a ‘fantasy’ read… Oh dear, that’s not really in my wheelhouse. If you have any recommendations, please let me know!