There’s nothing I enjoy more than a really good romance series to sink my teeth into! These have both been in my neverending to-be-read pile for way too long, and where one ended up being surprisingly sweet, one was quite sour!

CONSEQUENCES: Claire Nichols wakes in an unfamiliar mansion and discovers that she’s at the mercy of billionaire Anthony Rawlings. To the rest of the world, he’s charismatic and generous. It doesn’t take Claire long to learn that something more sinister lies beneath his polished facade. As time passes, Claire survives, and her strength penetrates Tony’s veneer, igniting passion where only fear had existed. As the pieces of the puzzle come together, the question becomes clear…Is anything as it appears?

TRUTH: After enduring Anthony Rawlings’ vendetta, Claire is faced with the consequences of her new freedom. With the help of old and new friends, she strategizes to rebuild her life and learn the truth of the past. Secrets are revealed, true foes are exposed, and Tony admits his true feelings. Claire must decide who she believes—who is telling the TRUTH?

CONVICTED: Facing her oldest fear, Claire learns the true meaning of isolation. Who can rescue her from this nightmare? Tony? Harry? Phil? Or perhaps a more unlikely savior? Will it happen in time, or will the consequences of the revealed truths be more than she or anyone can handle? As the cards are played, who will win the game?

REVEALED: THE MISSING YEARS The complete showing of the missing years as told by Tony, Phil, Harry, John, and Brent. Experience Tony’s consequences for his role in the past. This is NOT a companion, but a full-length novel.

BEYOND THE CONSEQUENCES: The consequences have been paid, dearly by some. Enjoy a look into the future of the Rawlings world.

I’m finally getting through some reads from my to-be-read pile, and the Consequences Series by Aleatha Romig is a dark romance that I’ve heard so much about and wanted to read for quite some time now!

Claire and Anthony’s tale beginning with the first book in the series, Consequences, is not for the faint of heart, and if you have certain triggers, please proceed with caution. Anthony’s character came across as terrible, and I mean that with a capital ‘T’. Honestly, I think this is probably the longest time that I can recall that it’s ever taken me to like a hero at all and didn’t happen until the end of the second book, Truth. But boy, did he did grow on me, and as more and more secrets were revealed throughout this series, he totally won me over!

The entire romance series was so complex, steamy, and completely consuming with its many layers of mystery, suspense, and one crazy twist after another. Just when I thought the story was moving one way, it went the other, and I love it when an author gets me all wrapped in a fantastic plot like this!

Where the series started at a four-star read for me, it transitioned into five stars all the way, and since these are also my first reads by Romig, I’m definitely looking forward to more! 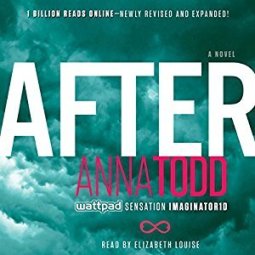 Tessa is a good girl with a sweet, reliable boyfriend back home. She’s got direction, ambition, and a mother who’s intent on keeping her that way.

But she’s barely moved into her freshman dorm when she runs into Hardin. With his tousled brown hair, cocky British accent, tattoos, and lip ring, Hardin is cute and different from what she’s used to.

But he’s also rude—to the point of cruelty, even. For all his attitude, Tessa should hate Hardin. And she does—until she finds herself alone with him in his room. Something about his dark mood grabs her, and when they kiss it ignites within her a passion she’s never known before.

He’ll call her beautiful, then insist he isn’t the one for her and disappear again and again. Despite the reckless way he treats her, Tessa is compelled to dig deeper and find the real Hardin beneath all his lies. He pushes her away again and again, yet every time she pushes back, he only pulls her in deeper.

Tessa already has the perfect boyfriend. So why is she trying so hard to overcome her own hurt pride and Hardin’s prejudice about nice girls like her?

Now newly revised and expanded, Anna Todd’s After fanfiction racked up 1 billion reads online and captivated readers across the globe. Experience the Internet’s most talked-about book for yourself!

There was the time before Tessa met Hardin, and then there’s everything AFTER … Life will never be the same.

I’ve heard so much hub-bub about the amazingness of the After Series by Anna Todd, and with the recent release of the movie a few months back, my curiosity finally won out!

After was quite long (582 pages and 97 chapters), but it was a very addictive read. Tessa and Hardin’s characters were endearing and relatable, and I really wanted to know where Hardin’s anger issues stemmed. From my own personal experience, I think Todd did a great job depicting the conflicting emotions of dealing with a toxic relationship like Hardin and Tessa’s, however, their immaturity and constant back and forth gave me whiplash and finally wore me out.

Clearly, this was a hit with the younger generation, and my teenage daughter informed me that After was based on Harry Styles fan fiction and several of her friends had read it ‘years ago’ when Todd originally wrote in Wattpad. This threw me off a bit because it’s not really age-appropriate for early teens with all the racy scenes, but, I’m not their parents…

Elizabeth Louise’s narration from Tessa’s point of view was great in After, and I couldn’t resist jumping right on into the next book in this series, After We Collided, curious to know if Tessa and Hardin would find their happily ever after together or kill each other first. I loved Shane East’s fantastic British accent for Hardin’s point of view, which was added in this book and only drew me in even more. I really had such high hopes for Hardin and Tessa’s drama to die down some, but that was not the case. After giving the first book four stars and trying to finish the second audiobook for three months, I finally gave up. Maybe I’m just getting too old for this genre.

Start After Series by Anna Todd on Audible!

What’s a really good series that you recently got into and loved?

5 thoughts on “August Confessions of a Serial Reader!”