With hackers, politics, the cartel, and enough steam to melt your Kindle, all I can say is that Cruel Sanctuary is a fantastic start to The Wages of Sin Duet! 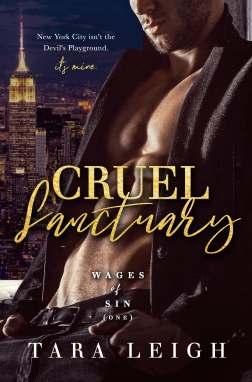 They say New York City is the Devil’s Playground.
They’re wrong.
This city belongs to me.
And so does Aislinn Granville.

She is a pampered politician’s daughter.
A decorative ornament,
raised to smile and nod and do what she’s told.

Except… she doesn’t. Not with me. Ever.

In this city full of thugs and thieves, I’ve kept Aislinn safe.
From my enemies.
From me.

With hackers, the cartel, politics, and enough steam to melt your Kindle, all I can say is that Cruel Sanctuary is a fantastic start to The Wages of Sin Duet!

Successful, smart, and very strong-willed, Aislinn Granville was at the top of her game as the political strategist for Manhattan’s District Attorney, also known as her father. Although they didn’t have the best relationship, I really admired Aislinn’s dedication to him and could only relate to her devastation when she discovered his business misdealings. Since they also put her safety into question, I also understand her frustration and panic of being forced into Damon’s protection.

‘Damon King is like a shark camouflaged by the color of the ocean – invisible until it is too late, his sharp teeth slicing through skin, breaking through bone, leaving behind only blood in the water.’

I always love a hero who knows what he wants, and Damon King was definitely that! He was a hacker, a killer, and literally the king of keeping the criminal balance in the Manhattan underground. Although he could be ruthless, cold, and calculating, Damon was really selfless and courageous. He was so complex, and I actually found his character to be really endearing.

‘Of course, Aislinn Granville is already caught. All that remains to discover is how hard she fights the lure.’

Boy did Aislinn fight that lure – she was such a spitfire! Seriously, how about that burning bed??? Damon and Aislinn were both so bull-headed, and she continued to blow his mind every step of the way. As they found more common ground in their relationship, I loved seeing Damon’s heart underneath all of his dominance, and their passionate and sexy scenes just steamed off the pages. I was a little torn on whether or not Aislinn got over her disdain for Damon’s criminal side a little too quickly or not, but hell, I got over it too there for a while!

‘I assure you, my blackened soul will only stain your squeaky-clean hands. My dark will suffocate your light.’

I’ve only read a few of Tara Leigh’s books, but she continues to win me over every time with her sweet, steamy, and suspenseful reads. I love the passion in her stories, and Leigh did a great job creating this intriguing and complex dark romance. I did feel like I wanted to be in on the action on some more of Damon’s outside business dealings during the story, but it’s only because I love this type of storyline and am always drawn to the dark and dirty details!

Cruel Sanctuary does end in a cliffhanger, and thank goodness Corrupt Savior, the follow up in The Wages of Sin Duet, is releasing on May 13th. I’m not the most patient when it comes to cliffhangers, but I’ll bet this one is well worth the short two months wait! 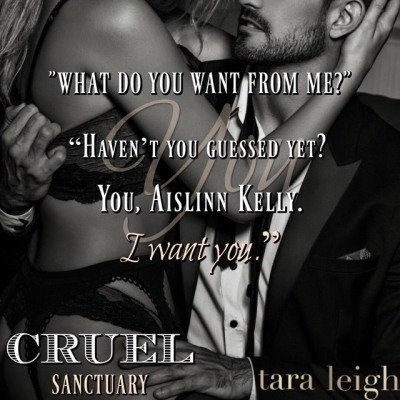 “Put me down.” I keep my cool, making the demand as stiffly as if I’m asking him to pass the salt.

But my show of composure crumbles as he angles his head to look at me. Barely an inch separates the tips of our noses. I stare, entranced by the fine scar that marks his left eyebrow. I want to kiss it.

One corner of his mouth tics up, his eyes flicking away from mine. “You look damn good in my arms.”

I follow his stare and am met by our reflection in the bathroom mirror. I blink, taking in the sight of my naked body held against King’s broad chest, the tanned, inked forearms I’d practically drooled over earlier now wrapped around my back and behind my knees.

I am naked. King is dressed.

I know what it’s like when a man overpowers a woman. When he uses force to take what’s not his. To hurt and abuse and terrorize.

And I know that this isn’t that.

It may not look like it, but I have the power in this situation. Damon King came to me. First at my apartment and now in his. He broke down two doors tonight.

I may be naked, but the only reason he’s touching me is because he knows I want him to.

Emboldened, I look away from our reflection and directly into King’s eyes again. Leaning in, I brush the tip of my nose against his. “Kiss me.”

I’ve barely pushed the words out when his lips are on mine. The taste of him is an explosion inside my mouth. Smooth and potent, but with a hint of mint. As if he swilled some of that Balvenie from his bar and then sucked on a peppermint candy.

He kisses like a conqueror. Stealing my breath along with the last of my reservations.

He kisses like a king. Staking his claim, demanding his due.

Make sure you enter Tara’s giveaway!! 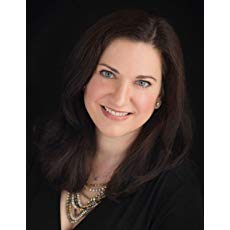 Tara Leigh is a multi-published author of steamy contemporary romance. A former banker on Wall Street, she graduated from Washington University and holds an MBA from Columbia Business School, but she much prefers spending her days with fictional boyfriends than analyzing financial spreadsheets. Tara currently lives in Fairfield County, Connecticut with her husband, children, and fur-baby, Pixie. She is represented by Jessica Alvarez, of Bookends Literary Agency.