On the Corner of Love and Hate by Nina Bocci is now available!

Bocci’s solo debut and start to her new Hopeless Romantics Series was a fun and entertaining read, and I’m really looking forward to more of this series!

~ On the Corner of Love and Hate by Nina Bocci ~

What’s a campaign manager’s worst nightmare? A smooth-talking charmer who’s never met a scandal that he didn’t like.

When Emmanuelle Peroni’s father—and mayor of her town—asks her to help rehab Cooper Endicott’s image, she’s horrified. Cooper drives her crazy in every way possible. But he’s also her father’s protégé, and she can’t say no to him without him finding out the reason why: Cooper and her have a messy past. So Emmanuelle reluctantly launches her father’s grand plan to get this Casanova someone to settle down with and help him lose his lothario reputation.

Cooper Endicott wanted to run for Mayor, but he never wanted the drama that went with it. Now that he’s on the political hamster wheel, the other candidates are digging up everything from his past. Even though he’s doing all the right things, his colorful love life is the sticking point for many of the conservative voters. He wants to win, badly, and he knows that if he wants any chance of getting a vote from the female population, he needs to change his image. The only problem? He might just be falling in love with the one person he promised not to pursue: the Mayor’s off-limits daughter.

A perfect blend of humor and heart, ‘On the Corner of Love and Hate’ is the first in a new series from USA TODAY bestselling author Nina Bocci. 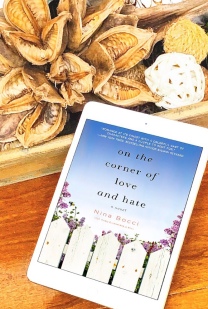 On the Corner of Love and Hate by Nina Bocci is her solo debut novel and start to her new Hopeless Romantics Series. This was a sweet and slow-burning friends-to-enemies-to-lovers romance, and combined with the political storyline made for a very enjoyable read!

I really liked Emma (short for Emmanuelle) and Cooper’s characters in the story. Since they had known each other since they were children, they both knew just how to get the other’s goat, and it was fun to follow their jabs at each other throughout. Clearly, they were on two totally different pages in their relationship, and I felt for Cooper and his clueless frustration of why Emma hated him, as well her own confusion in why he wouldn’t leave her alone. As their feelings were revealed, I better understood where Emma was coming from, but I did think that she was a little too hard on him!

Bocci really excelled in writing this light yet well-developed story for me. It encompassed many of the things that I always enjoy in my reads with its plot surrounding politics, small-town charm and feel, and intriguing secondary characters in the story. When I mentioned Cooper and Emma’s romance was slow-burning, let me reinforce that it was very slow-burning and drawn out until the very end. The buildup was fantastic and quite sweet, but I would have liked an earlier transition in their relationship and more focus on the romantic aspect of the story.

Overall, Bocci’s debut made for a fun and entertaining read, and I’m really looking forward to the next book in this series, Meet Me on Love Lane, featuring Charlotte’s story and coming December 10th!

ARC kindly provided by the author via NetGalley in exchange for an honest review.

Get On the Corner of Love and Hate on Amazon today! 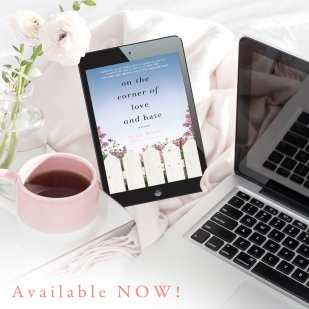 USA TODAY bestselling author Nina Bocci is a novelist, publicist, eternal optimist, unabashed lipgloss enthusiast, constant apologist, and a hopeless romanticist. She has too many college degrees that she’s not using, and a Lego addiction that she blames on her son.

5 thoughts on “New Release Review & Giveaway ~ On the Corner of Love and Hate by Nina Bocci!”