It seems like I’ve been flying through the new-to-me authors lately looking for some new and unique romances to enjoy. My October Short & Sweets feature reads more on the dark, angsty, and suspenseful side, and while some were bigger hits than others for me, they might be just what you’re looking for!

A new, seductive forbidden romance that caters to Manhattan’s elite…

I knew the rules:

Never reveal my true identity.
Play the game, give the illusion.
Don’t get close to the clients.

The dark and glamorous lifestyle of the rich and shameless open my eyes to a lavish world of sin and wealth, and a man I can’t have.

A man I desperately want—James Riviera.

We’re treading a fine line as we live the ultimate double life until we make a startling discovery that tests both our loyalties.

I only had to follow the rules, but rules are meant to be broken.

Lucia Franco is yet another new to me author, and with its stunning cover and totally intriguing synopsis, I really couldn’t resist picking up Hush, Hush. Let me just say, I had a major case of the wows with this read!

Aubrey and James’ complex romance completely steamed up my kindle and pushed my comfort boundaries. The incredibly well-written story pulled me in from the beginning, gave me heart palpitations throughout, and kept me guessing until the very end. If you are looking for a suspenseful and steamy romance to keep you on the edge of your seat, this is the book for you!

Darker and dirtier than ever before. Trilina Pucci brings you an alpha hero, Dominic King, that breaks the mold. Get ready to swoon over this instalove story. Truth is a standalone novel.

The moment I saw her, I wanted her.
I just didn’t expect to want to keep her.
Then she walked away.
But she should’ve known better.
I’m not the kind of man you turn your back on.
Because I’m ruthless, powerful and unforgiving.

Something she’ll soon find out.

I will own her. Body and soul.
Consume her while she begs for it.
What started as one night will become forever.
And I’ll destroy anyone that gets in my way.

Drew Matthews is mine.

Truth is my first read by Trilina Pucci, and I enjoyed it!

Dominic’s character kind of stole my heart – I always enjoy seeing a powerful alpha hero get all melty when it comes to his leading lady. However, I didn’t really feel the execution of Drew’s character flowed very well in the story though. I liked her and understood the reasons why she needed the change, but the complete switch in her demeanor just felt abrupt to me.

The story was sexy and suspenseful, and I enjoyed being pulled into the many facets of King’s complex empire. While overall it’s not a particularly memorable story, I’m curious to know more about the secondary characters and see where this Sinful Series will go! 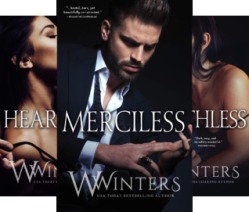 I should’ve known she would ruin me the moment I saw her.
Women like her are made to destroy men like me.
I couldn’t resist her though.
Given to me to start a war; I was too eager to accept.

But I didn’t know what she’d do to me. That she would change everything.
She sees through me in a way no one else ever has.
Her innocence and vulnerability make me weak for her and I hate it.
I know better than to give in to temptation.

A ruthless man doesn’t let a soul close to him.
A cold-hearted man doesn’t risk anything for anyone.
A powerful man with a beautiful woman at his mercy … he doesn’t fall for her.

These are my first reads by Willow Winters, and if I had to describe this Merciless Series in one word, it would be addictive. While the first book in the series, Merciless, started off a bit slow, the pace and intensity really picked up, and I ended up flying through the rest of this series!

Carter was a powerful and obsessive alpha hero, and while he definitely wasn’t easy to like early on, once his heart and depth were revealed, it was hard not to fall for him in the end. While Aria’s insecurity was her major weakness and her continual doubt wore on me a bit, I loved how Carter played such a major role in getting her to see how much power and strength she really had as her character evolved.

Although I didn’t totally fall in love with them being together romantically, Carter and Aria’s complex story was well written, action-packed, and an enjoyable read overall. The complete series is an investment and some of the books seemed more like novellas, but perhaps it’s just because I went through it so quickly? Regardless, I also really enjoyed Carter’s brothers, who each have spin-off series, so I’ll have to check them out as well!

The story of Deuce and Eva…

An undeniable connection that stands the test of time.

Love and pain and everything in between.

I was five years old when I met Deuce, he was twenty-three, and it was visiting day at Riker’s Island. My father, Damon Fox or “Preacher”, the President of the infamous “Silver Demon’s” motorcycle club -mother chapter- in East Village, New York City, was doing a five-year stint for aggravated assault and battery with a deadly weapon. It was not the first time my father had been in prison and it wouldn’t be the last. The Silver Demon’s MC was a notorious group of criminals who lived by the code of the road and gave modern society and all it entailed a great big f**k you.

“Never forget the day Eva came bouncin’ into my f**ked up life, shakin’ pigtails, singin’ Janis, wearin’ chucks and sharin’ peanuts and straight-up stole any decency I had left which wasn’t a whole lot but she f**kin’ took it and I’ve been hers ever since.”

***Warning*** (This book contains several aspects of the uglier side of life; it is not for everyone.)

So I’m not gonna lie, I’m not really an MC kind of gal, and I’ve actually only read a few. One of my book besties loves Madeline Sheehan’s writing, and since Undeniable is her favorite, I wanted to give it a try. I know that I’m in the minority here, but I’m still not a fan and this was a really hard read for me to get into and even finish.

The story was very well written and definitely pulled me into the MC lifestyle. It was also suspenseful with some twists and turns, but this is just not a scene that I can connect with. Although the characters did have some redeeming qualities, I feel like the brash way the males talk to and treat the women along with the constant cheating overall just doesn’t really feel romantic to me.

So I tried, and if you are a fan of MC romance, I definitely think you should too. I hear so many wonderful things about Madeline Sheehan’s writing!

Start A Sinful Series with Truth by Trilina Pucci – FREE in Kindle Unlimited!

Do you have a favorite dark or suspenseful romance or author to share?