An alternate title/cover for this series has been created.

Worse, he owns me now—every inch of my body and a sizeable chunk of my stupid, naïve heart.

And he’s made it clear that if I want to keep my job and stay in Alaska, I’m stuck catering to his every whim and wish—both in the hotel and in his bedroom—while I wait for the potential fiery media circus ring that will no doubt drag my reputation into the gutter along with his, should his past discretions surface.

I will not surrender to his demands, not when I have dirt to hold over his head. IF I have the guts to blackmail him, that is. And something warns me that going through with it will have disastrous consequences for my heart.

Break Me is the second book in the addictive The Wolf Hotel series. It should be read after Tempt Me. Teach Me and Surrender To Me are books 3, and 4.

Break Me (previously Wolf Bite) is book two in Nina West’s The Wolf Hotel Series which just absolutely continues to consume me! West is so talented at conveying her characters, and the lust-filled angst of her stories leave me with yet another morning of additional cups of java due to reading all night.

In the previous book, we were left with Abbi unsure and wondering if she has gotten in bed with the Big Bad Henry Wolf.  She learns of the pending lawsuit and sexual assault allegations against Henry and a heap of a mess that can possibly result from it.  Is Henry a liar?  Did he actually do it? Did he just use her and now will she be dragged through the mud as well? We are left completely in the dark with that cliffhanger and many unanswered questions. ‘Wolf Bite’ answers all the above questions and leads into a whole different direction for Abbi and Henry that I was certainly not expecting.  I think it left me even more impressed with West’s ability to convey true to life experiences and keep the story fresh and the angst and tension left me on the edge of the seat!

I couldn’t believe what Abbi did quite honestly, but that is what made the story even more believable.  I certainly don’t condone it, but in life things like that do actually happen (right?), and as I thought more about it (I was so shocked), it somehow made sense and I understood why she did it. She was so insecure in her relationship with Henry, and there was also a huge age difference between Abbi and Henry as well as sexual experience.  I know that people do make mistakes, and I certainly didn’t like her very much for what she did. However, West was still able to convey Abbi as a relatable character, and although it was quite a segway in Abbi and Henry’s relationship it had a smooth transition in the storyline. Hell, I even found myself pinching myself trying not to skip a bit to the conclusion to see if they could reconcile after everything happened – I do not recommend this – you will be a cheater too!

So Break Me was full of surprises and is certainly very sexy and steamy and not for the faint-hearted or sexually closed-minded reader.  I think the writing style is just amazing, and I can’t wait to dive into book three in this series, Wolf Prey / Teach Me!!! 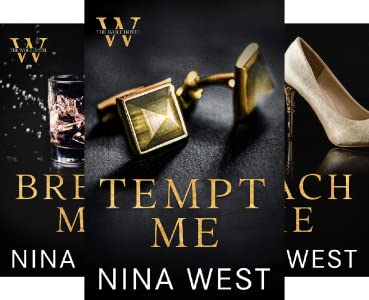 Nina West is the author of the sinfully sexy and highly addictive The Wolf Hotel Series and Dirty Empire Series. She lives in the city but spends her summers in the wilderness.

To get news of Nina West’s latest book releases, follow her on social media and sign up for her newsletter!

One thought on “Review of Wolf Bite (Wolf Cove #2) by Nina West!”